Concentric circles in the style of Kandinsky 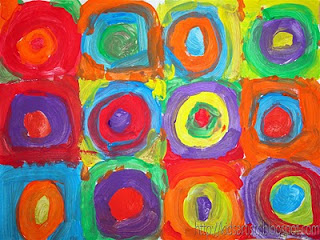 Wassily Kandinsky (1866 – 1944) was a Russian-French painter. His style of painting originally belonged to expressionism, and is sometimes included in symbolism. Kandinsky was one of the artists who gave shape to the abstract art in the early twentieth century.

Kandinsky was inspired by music. According to his own timbre theory, each colour has its own language and expression, and each colour has a soul. Kandinsky tried to convert musical compositions into paintings. He heard colours in music and he saw music in colours. This correlation between music and colour is the starting point of this lesson. Show students images of by Kandinsky. Tell that he listened to music while painting. Look at the painting 'Squares with concentric circles'. Which circle would belong to cheerful music? And what kind of music did Kandinsky hear while painting the dark circle? 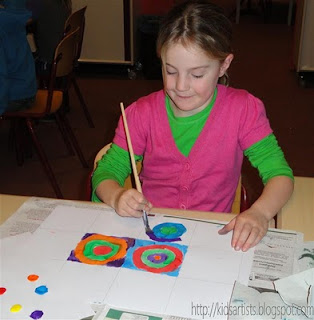 Students are going to make a painting in the style of Kandinsky while listening to classical music. During this lesson they listened to Vivaldi's Four Seasons. Each student gets a white sheet with 12 squares of 10 by 1o cm. Tell them to work from the outside to the middle. We may see no white anymore. Try to avoid two the same colours in one circle. Hang all paintings together on a bulletin board for a great group project!

Made by students of grade 1