Made by students of grade 1
You need:
Cut notches in the beer coaster at intervals of 1 cm. Be sure it is an odd amount. Wrap cotton yarn around the tray, back to front, until the whole beer counter is wrapped. Start weaving in the middle. Use different colours of yarn. Don't weave too tight, to keep the work flat.

To make the flower you have to paint a paper plate with tempera paint. If you use plastified plates, the paint will give a wrinkly effect. Cut a circle ouot of a white sheet circle which is two cm larger then the plate. This will be the outer edge of the flower. Paint it too.
Paste the woven circle on the plate. Paste the plate on the coloured circle. Paste it all on a coloured sheet. Cut petals and a stem out of green paper and finish the flower.
Posted by Jacquelien Geen opmerkingen: 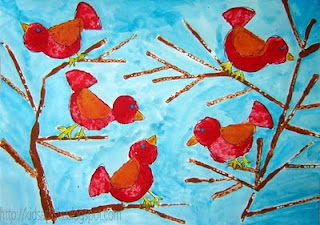 You need:
In 'The Usborne Complete Book of Art Ideas' I found this great lesson.

Place a paper towel on a saucer and spray a stripe of brown paint on it. Use the side of a piece of corrugated cardboard of about 7 cm to stamp branches.
Cut the medium potato in half and cut this half again. Stamp the bodies of the birds using red tempera.
Cut the half potato in two pieces. Use the quarter to stamp the tails.
Cut the small potato in half and stamp the faces of the birds.
Clean this half potato with a tissue and cut it in two. Stamp the wings.
Paint beaks, eyes and legs. Leave the work to dry. Paint the background with watercolour paint. Outline the birds with a fine black marker.
To make spring art work, you can add leaves by stamping them, cutting them out of green paper, using real dried leaves or .....use Paint shop pro, like I did! 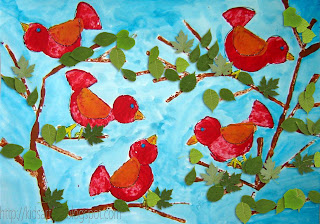 Fantastic felines in the style of Laurel Burch 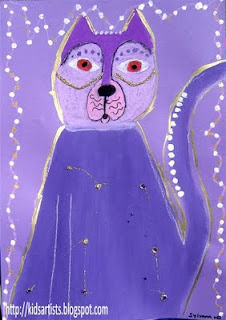 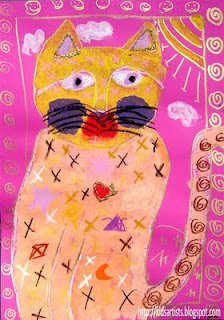 Laurel Burch (1945 –  2007) was an American artist, designer and businesswoman. As a 20-year-old single mother she found metal in junkyards to hammer into jewelry to support her two children, and went on to launch her business, now called Laurel Burch Artworks, in the late 1960s with the help of a small staff that worked out of her house. She began making paintings and was commissioned by restaurants, businesses and private collectors. Burch designed, among other things, beads, jewelry, paintings, T-shirts, scarves, coffee mugs and tote bags, but 90% of her designs derived from her original paintings.

Especially Burch's cats are recognizable. Few some of her paintings on the website of Laurel Burch and discuss the salient features: bright colours, bold pattersn, eyes and nose are drawn out of one line. use of silver and gold.

Students draw a cat on purple or pink paper in the style of Laurel Burch. Colour the cat using different materials like tempera, oilpastels, gold and silver markers. Outline the cat with silver or gold. Draw a frame around the artwork. Use glitter to accentuate lines. 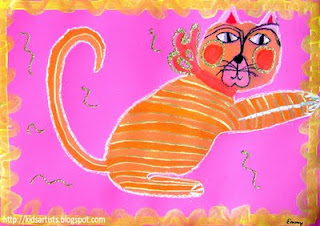 All artworks are made by students of grade 5
Posted by Jacquelien 5 opmerkingen: 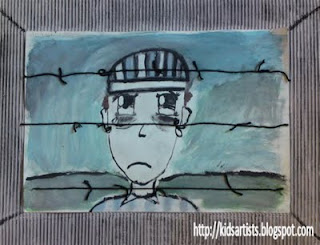 You need:
In Holland we rembember the victims of World War II on the 4th of May. The 5th of May we celebrate the day of liberation. In schools World War II is an important part of the history lessons. Students are always very interested in this topic.

"We had to draw one or more people in a concentration camp. Our drawings should show the fear and powerlessness of the prisoners. Most of all did well and the artworks were really beautiful. When the drawing was finished, we had to paint it with watercolour paint, using sad colours. We used black wool to make barbed wire and pasted it in front of the drawing. Finally we pasted the artworks on ribbed cardboard. It was an intense task, and it made us really think about that terrible time." 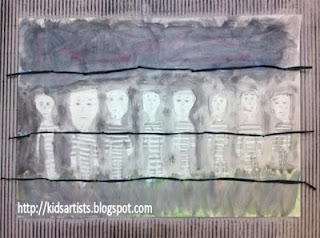 Artworks are made by students of grade 6
Thanks to Sylvia Versteeg
Posted by Jacquelien 4 opmerkingen:

You need:
What kind of lines do we know? Let students draw them on the blackboard: straight - horizontal, vertical, diagonal; angular, like zig-zag and curved lines.
Students have to make four Easter eggs. Ouline the template with a pencil. Draw straight lines in the first egg, curved lines in the second one and zig-zag lines in the third one. The fourth egg may is made with lines of their own choice. Trace the lines with a fine black marker. Colour them with four different materials: colour pencils, markers, chalk pastel and crayons. Cut the eggs and paste them on a coloured sheet. 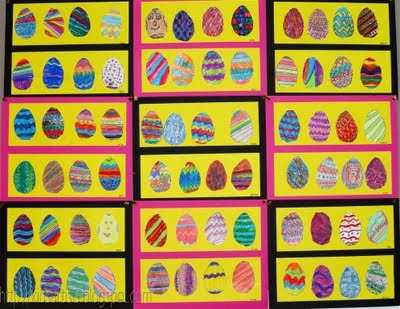 Made by students of grade 3
Posted by Jacquelien 1 opmerking:

﻿
﻿
Fold four tulips in different colours. Paste them on a piece of cardboard. Cut stems and leaves and paste them.
Posted by Jacquelien Geen opmerkingen: 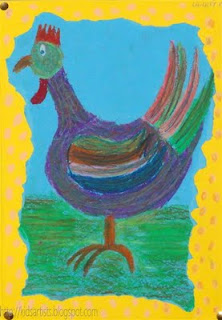 Made by a student of grade 5
You need:
Draw a chicken on blue construction paper, using the tutorial on How to draw a chicken. Make it a charming chicken by colouring it in bright colours. Mix colours to create smooth transitions. Draw a horizon line and colour the ground. Draw somethin on the horizon line, Teken een horizonlijn en kleur de grond. Teken iets op de horizonlijn, for example a fence or a farm.
Tear the edges of the blue sheet away and paste the chicken on a yellow undersheet. Draw eggs around it. 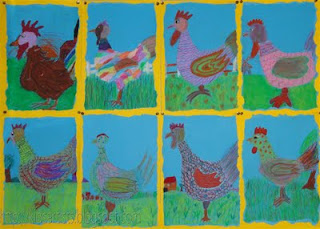 Made by students of grade 6
Posted by Jacquelien 2 opmerkingen: 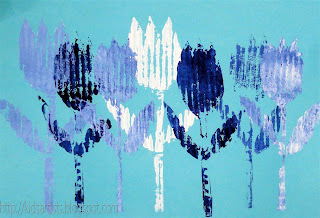 You need:
Draw two or three tulips in different sizes on a cardboard box. Cut them. Shake the bottle of blockprint carefully to be sure oil will mix with the rest. Drip some paint on the glass and roll it out with the lino roller. Roll the paint on the tulips and press them on a white or coloured sheet, using a book. Remove the tulips of the sheet and roll them again. Add white to the colour on the glass for a lighter colour. Place the tulips tulips partly overlapping the first, and press again with a book.
Posted by Jacquelien 2 opmerkingen:

In the style of Jean Dubuffet 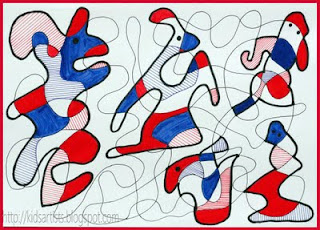 Jean Dubuffet (France, 1901-1985) was a French painter and sculptor. He was very interested in drawings of children and mentally disabled. He called those drawings Art Brut (raw art):art produced by non-professionals working outside aesthetic norms, such as art by psychiatric patients, prisoners, and children. Dubuffet sought to create an art as free from intellectual concerns as Art Brut, and his work often appears primitive and child-like.
Many of Dubuffet's works are painted in oil paint, thickened by materials such as sand and straw, giving the work an unusually textured surface. During the early 1960s, Dubuffet produced a series of paintings in which he limited himself to the colours red, white, black, and blue. Those works resemble jigsaw puzzles, such as Nunc Stans (Guggenheim Museum, New York), in which tiny, obscure, closely spaced figures and faces dominate.
Towards the end of the 1960s he turned increasingly to sculpture, producing works in polystyrene which he then painted with vinyl colour paint.

Look at artwork of Dubuffet, especially Allées et venues. Discuss the salient features: colours (mostly red, blue, white, black), recognizable and unrecognizable shapes, curved lines, hatched areas and the whole sheet is full.
Students fill their sheet with wavy crossing lines, using a pencil. Then they search human or animal figures in those lines. Trace these figures with a black marker. Colour the patches of these figures in red, blue, hatched red and hatched blue. Leave some patches white. Outline the figures with a wide black marker. Trace de remaining lines between the figures with a fine black marker. 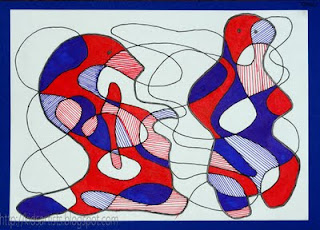 Made by a student of grade 6
Posted by Jacquelien 2 opmerkingen:

Scenes from a fairy tale 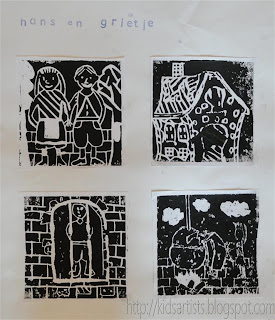 Hansel and Gretel, made by students of grade 6
You need: 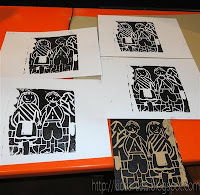 I got the idea for this lesson from Artlessons from Belgium. This is a group assignment for four students.
Every group of students chooses a fairytale that has to be represented in images. They discuss the most important parts and each students cuts one scene out of linoleum. After printing the scenes, they paste them in the right order to create a fairytale cartoon. Use letter stamps to print the name of the story above.

I chose to let all students print their part of the fairytale four times. The best print is for yourself. Each student gets one print of the other three group members, so every student has his own cartoon. 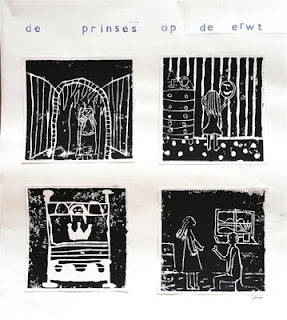 The princess on the pea
Posted by Jacquelien 1 opmerking:

The Emperor's underwear, by students of grade 3
You need:
The Emperor's New Clothes is a fairytale by Hans Christian Andersen, first published in 1837 in Andersen's Fairy Tales Told for Children.

The story is about an emperor, who cares for nothing but his appearance and attire, hires two tailors who promise him the finest suit of clothes from a fabric invisible to anyone who is unfit for his position or 'just hopelessly stupid'. The emperor cannot see the cloth himself, but pretends that he can for fear of appearing unfit for his position. When the swindlers report that the suit is finished, they mime dressing him. Then the emperor marches in procession before his people. A child in the crowd calls out that the emperor is wearing nothing at all and the cry is taken up by others. The emperor cringes, suspecting the assertion is true, but holds himself up proudly and continues the procession.

Read the fairytale. Tell students they have to draw the emperor. The emporor , who is recognizable by his crown, is almost nude. The only cloth he wears is beautiful underwear. Colour the drawing with colour pencils.
Posted by Jacquelien 1 opmerking:

Chicken on a stick 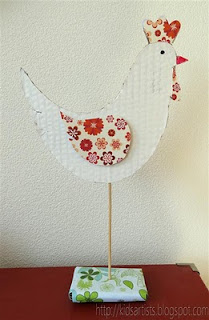 You need:
Draw a chicken on cardboard. Cut it. Paint the chicken and colour the beak. Cut two wings out of cardboard and cover them with coloured paper. Paste the wings with double sided tape on the chicken to make them look 3D. Cut a comb and wattle out of coloured paper and paste them on the chicken. Use a marker to draw an eye.
Cut three pieces cardboard of 8 by 5 cm and stick them together. Paste coloured paper around it. Insert a skewer into the stand and plug the other end in the chicken.
Posted by Jacquelien 3 opmerkingen:

Hansel and Gretel
You need:
The goal for this lesson is to convert a famous fairy tale into a comic. Students may draw only four pictures, so they should think very carefully about the most important scenes in the story. The story should be obvious from just those four pictures!

Divide the sheet into four sections. Draw four scenes and use speech bubbles if you want to. Colour the drawings with markers or colour pencils. Outline them with a fine black marker. You can choose to colour the drawings completely, but also a black and white strip with a single accent colour is nice. 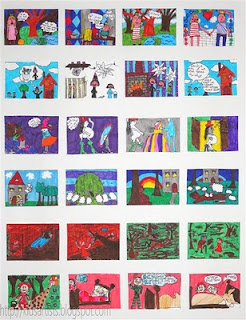 All artworks are made by students of grade 6
Posted by Jacquelien 2 opmerkingen: