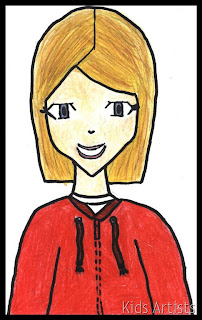 Manga consist of comics and print cartoons in the Japanese language and conforming to the style developed in Japan in the late 19th century. In their modern form, manga date from shortly after World War II but they have a long, complex pre-history in earlier Japanese art.

The name comes from 'uncontrolled or random brushstrokes'. This refers to the loose style of drawing. Anime is the term used for manga style cartoon films. Ask students some examples of anime films. They probably know Pokemon and Dragonball Z. Show them some manga style drawings, there are lots of them on the internet. Discuss the remarkable things about manga:

There are numerous internet sites where you can learn to draw manga. Google op 'how to draw manga'. For almost each body part you can find sites. During this lesson the students make a portrait of their face in manga style. Give them the schedule for the head (on the blackboard or a copy).

Discuss how students can make the manga figure look like himself. Discuss how the head itself can look like a manga self portrait. Think of appearance as a hairstyle, glasses, moles, colour of the eyes, jewelry etc. Students draw their own head and shoulders in manga style. Colour with coloured pencil, outline with black marker. 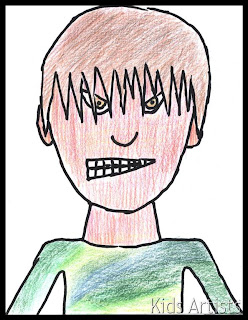 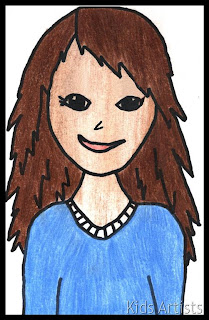