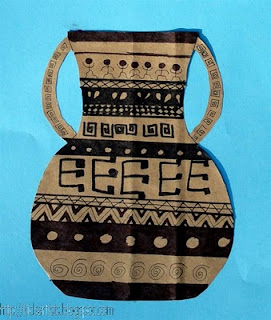 You need:
In ancient Greece pottery in daily life was very important. It was used to store and preserve all kinds of food, like wine, olive oil and water. The pottery was often decorated. There is red-figure pottery with red figures and the background black, and black-figured, with this just the other way. Wikipedia has more information about Greek pottery, especially on the different styles in the decoration of the vases.
View images of Greek pottery. Discuss several forms:

amphora - jug with a handle on both sides so it could be easily lifted. Amphora's were used to store liquids and solids.

crater - mixing vessel for wine and water. The Greeks always mixed their wine with water and sometimes they added spices to change the flavour.


kylix - bowl, flat or on an ornate base with two horizontal handles to pass the scale easily. 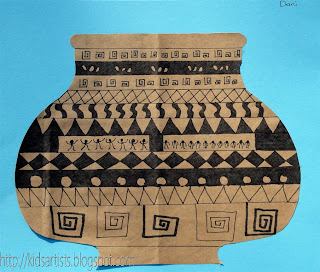 Discuss the different designs on the vases: animals, plants, people, flowers, triangles, spirals, mythical creatures etc.
The students fold a piece of brown wrapping paper in half and draw one half of a Greek vase of their choice against the fold. Cut the vase and draw figures and patterns on it using black sharpies. Paste the vase on a coloured sheet. 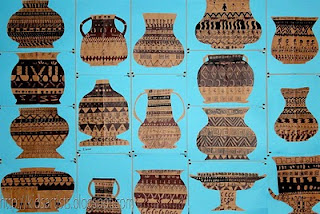 Made by students of grade 5
Posted by Jacquelien