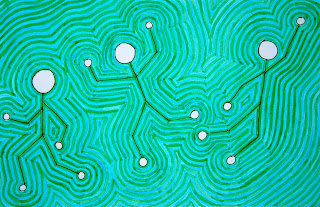 A lesson to experience how lines can accentuate a movement. Draw with a pencil four or five figures in motion on the paper. Make them simple, just out of lines and circles. Watch movements with the students by asking one of them to show some movements. Look especially to the limbs. Trace the figures with a black fineliner, leaving the inside of the circles white. Draw lines around the figures with markers in two colours. Try this first on a piece of paper to see how the two colours flow together when reaching eachother. The lines will become more and more smooth, accentuating the motion from the figures. I chose two colours close to eachother. Less spectacular, but less messy also!