The most beautiful fish in the sea 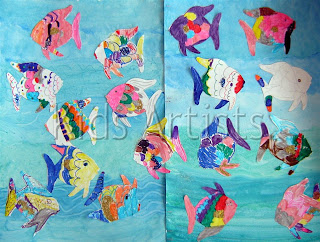 By children of 7-8 years old

The book 'Rainbow Fish' is translated in Dutch as 'The most beautiful fish in the sea'. That's why I called this lesson this way.

Ask two or three children to paint the background for this group project. In this project the backgrounds are painted by children of 12 years old. Paint one or two A1 sized sheets with diluted tempera paint in several colours blue and green. Sprinkle salt on it when the paint is still wet. Let dry. Staple the two sheets together. 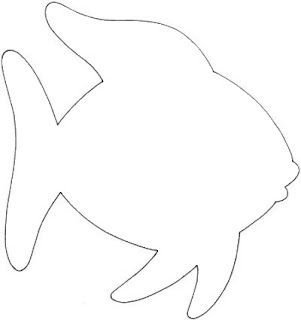 r tell the story of the Rainbow Fish, written by Marcus Pfister. The story tells of a fish with shiny, multi-colored scales. He is always fond of his scales. But one day, a small fish asks him if he could have one. Rainbow Fish refuses in a very rude way. The other fish are really upset about his behaviour and don't want anymore to play with him. Feeling upset, his only friend left, the starfish, tells him to go visit the mysterious octopus for advice. Rainbow Fish finds the octopus and asks what he should do. The octopus tells him that he should share the beauty of his scales with his friends. When he encounters the small fish a second time, the Rainbow Fish gives him one of his precious scales. Seeing the joy of this little fish, Rainbow Fish feels immediately much better. Very soon Rainbow Fish is surrounded by other fish requesting scales and he gives to each of them one of his shiny scales.

Children get a copy of the Rainbow Fish; of course children can draw their own fishe too. After drawing scales in it, they have to colour their fish with markers. Tell them to leave one scale white: Rainbow Fish will give his scale, a beautiful glittered one.

Cut the fish. Paste all fishes on the blue painted cardboard.